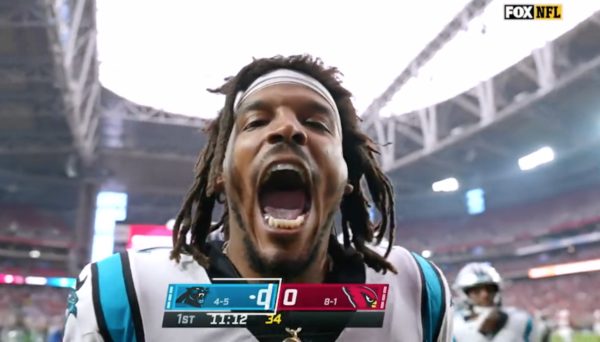 Cam Newton wasted no time making an impact in his return to the Carolina Panthers. The former NFL MVP did not start Sunday’s game against the Arizona Cardinals, but he did score the game’s first touchdown. His celebration was clearly planned ahead of time.

The Panthers’ first drive started deep in Arizona territory after they recovered a fumble. Newton came in on 2nd-and-goal from the 2-yard line and ran for a touchdown. He took his helmet off after scoring and yelled “I’m baaaack!” over and over again toward the fans.

CAM NEWTON IS BACK.

Newton was penalized for unsportsmanlike conduct since he removed his helmet while in the field of play. We’re guessing he didn’t care.

The Panthers expect Newton to be their starting quarterback eventually. The details of the quarterback’s new contract are proof of that. It will be interesting to see how effective he can be, but he seems to have injected a lot of energy into the team already.