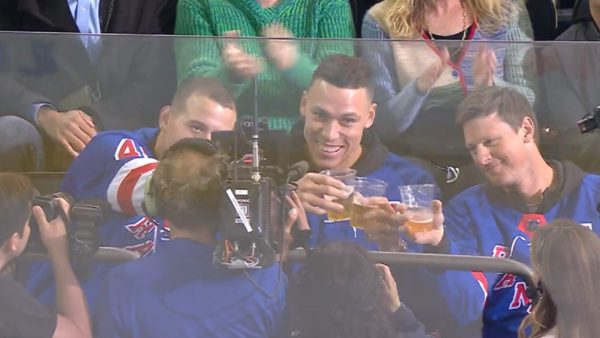 The New York Yankees had the day off on Thursday, so some of their players spent the free day by taking in a Rangers game. They sure seemed to have fun while they were there too.

Anthony Rizzo, Aaron Judge and D.J. LeMahieu all attended Game 2 of the Rangers’ playoff series with the Pittsburgh Penguins. They were shown on camera and did a cheers with their beer cups. Then they pounded the drinks.

Rizzo came in first, followed by LeMahieu and then Judge. The Rangers also won the game 5-2 to tie the series 1-1, so it was a happy night for everyone at MSG.

The Yankees have been playing great ball to start the season and are 18-7. Judge and Rizzo lead the team with nine home runs apiece. Sports are going quite well in New York these days.