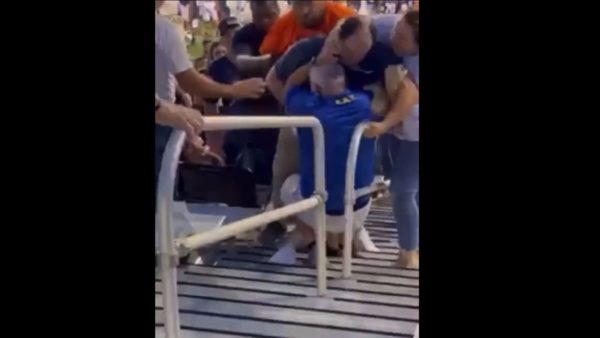 The coach in question is Jim Nowell, who is the head coach at Heidelberg High School in Heidelberg, Miss. The Laurel Leader-Call reported about the incident, which took place at a game between Wayne County High and Quitman High on Thursday night. The Leader-Call says fans claimed Nowell smelled of alcohol and was being belligerent. Nowell apparently mocked Wayne County for struggling against Quitman.

A fan sitting a few rows below Nowell apparently asked the coach to stop using profanity. Nowell, who was scouting ahead of a Sept. 2 game between his school and Quitman, ended up fighting the man.

You can see videos of the fight below:

Incredible video of Mississippi in all its glory pic.twitter.com/NTIm33nQCK

While we don’t know whether the fight continued past where the videos ended, what we do know is a photo showed Nowell with blood dripping down his forehead.

Welp, was just told that a Mississippi High school football coach got into a fight in the stands while scouting at another game. This is a wild development. pic.twitter.com/VkVCASaB3Y

The coach ended up being escorted out by security.

Nowell coached Heidelberg to a 5-4 record and region title last year. He has previously served as LSU’s strength coach. He didn’t look so strong in that fight.