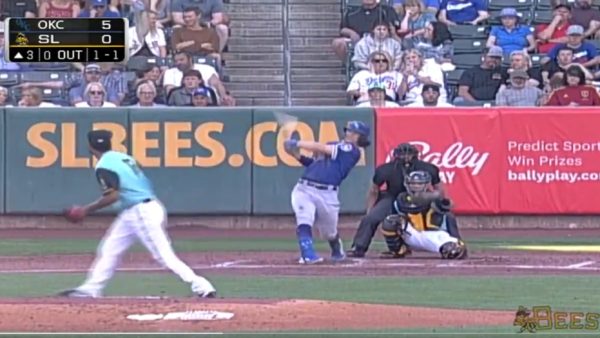 James Outman had an undeniably impressive first stint in the majors. He collected six hits in 13 at-bats, including two doubles, a home run and three RBI. He reached safety in all four games he started, but the Los Angeles Dodgers ultimately optioned him back to Triple-A following the return of Chris Taylor.

Returning to the minors did little to cool Outman off.

In his first at-bat back in the minors, the Oklahoma City Dodgers outfielder obliterated just the third pitch he saw. And when we say “obliterated,” we very much mean “obliterated.”

James Outman announces his return with authority and obliterates this ball! pic.twitter.com/9OCWxYXFSz

The ball came off Outman’s bat at 107.5 MPH and traveled an estimated 441 feet. Blake Harris of ESPN joked that it actually went 583 feet, which would have made it the longest recorded home run in history.

Whatever the distance, it was an absolute bomb — something the Dodgers have come to expect from Outman.

The 25-year-old Outman, who was selected in the seventh round of the 2018 MLB Draft, is rapidly developing into one of the Dodgers’ top prospects. He clearly has a bright future and if he keeps hitting bombs like that, he’ll find his way back to the big leagues in no time flat.