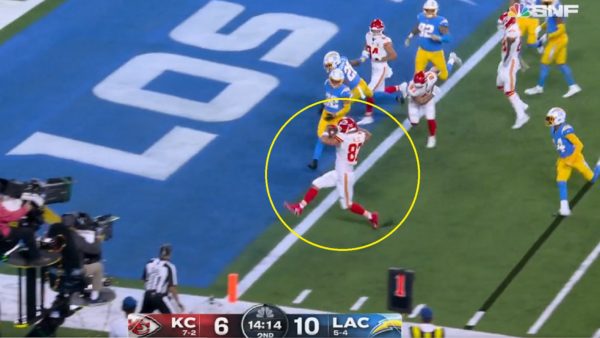 Travis Kelce scored a touchdown for the Kansas City Chiefs in the second quarter of their Sunday night game against the Los Angeles Chargers, and he decided to do some celebrating.

The Chiefs had a 1st-and-goal play from the Chargers 4 early in the second quarter. Patrick Mahomes threw a quick pass to Kelce, who got some good blocking and coasted into the end zone. On his way to his touchdown, he held his right arm to his helmet and pranced like Deion Sanders.

The only thing Kelce left out was the rest of the Deion dance in the end zone:

KELCE PULLING A DEION INTO THE END ZONE pic.twitter.com/iC5eSkYigd

Instead of finishing things off with the Deion dance, Kelce did the LaDainian Tomlinson finger roll to punctuate things.

In just over a quarter of play, Kelce had 4 catches for 66 yards and was having quite a big game.