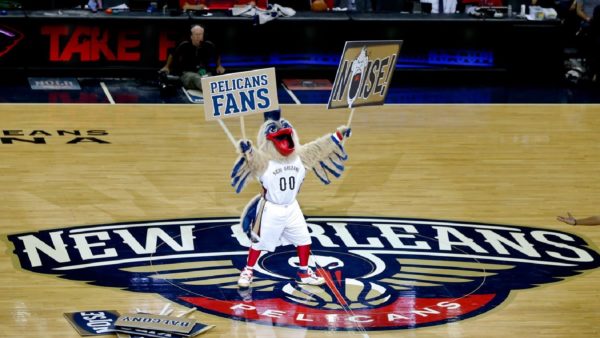 Oct 30, 2013; New Orleans, LA, USA; New Orleans Pelicans mascot Pierre the Pelican performs for the crowd during the second half of a game against the Indiana Pacers at New Orleans Arena. The Pacers defeated the Pelicans 95-90. Mandatory Credit: Derick E. Hingle-USA TODAY Sports

The Suns played the Pelicans in a two-game set (on Friday and then again on Sunday). The two teams, who faced each other in last year’s playoffs, got into it during the first game (a 128-117 win for New Orleans) over Pelicans star Zion Williamson’s controversial move at the end of the fourth quarter.

The hostilities continued in Sunday’s game with the Pelicans crowd giving a harsh reception to Suns guard Chris Paul, pelting him with boos throughout. At one point in the second quarter, Suns color commentator Eddie Johnson made a bizarre accusation — he accused the Pelicans of somehow using a boo “machine” to amplify the noise.

“I think I have a little tech in me,” said Johnson. “They are booing, but they got a machine in here that kinda echoes the boos, okay? Trust me, this crowd is not as loud as it seems.

“They’re loud, I’ll give them their respect,” Johnson added. “But they got a machine in here that’s really working wonders, man. I’ll tell you that right now ’cause I’m looking at people’s mouths, and they’re not saying anything. But yet, it’s a lot of boos.”

Eddie Johnson wasn't buying all the boos for Chris Paul in NOLA pic.twitter.com/BFqFHUiWbf

Johnson did not specify whether he saw an actual, physical machine in the arena. But with 18,681 fans reported to be in attendance for Sunday’s game, there is no way that Johnson could draw that conclusion just by looking at the mouths of a few fans. The veteran broadcaster and former Suns player also has a history of being salty when things are going poorly for Phoenix.

Paul, who played the first six seasons of his career in New Orleans, has since given Pelicans fans plenty of authentic reasons to hate him. Later on in the game, the crowd busted out in unison with a savage chant aimed at Paul. There is probably no machine anywhere on the planet that can do that.