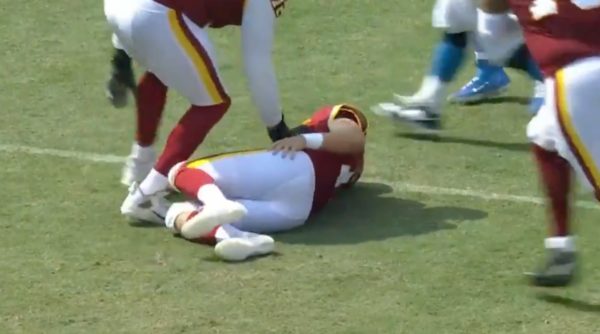 Washington Football Team fans have been feeling optimistic about the 20121 season with Ryan Fitzpatrick as their starting quarterback, but unfortunately the veteran was unable to make it through the first half of Sunday’s game against the Los Angeles Chargers.

Fitzpatrick suffered a hip injury on a big hit from Chargers edge-rusher Uchenna Nwosu in the second quarter. Washington quickly labeled him questionable to return with a hip injury. You can see the play below:

Here's the big hit on Fitzpatrick that has Taylor Heinicke warming up pic.twitter.com/U5P829SkIZ

Fitzpatrick, 38, signed with Washington this offseason after some rumors that he was planning to retire. He had a bold take on the team’s QB situation during training camp.