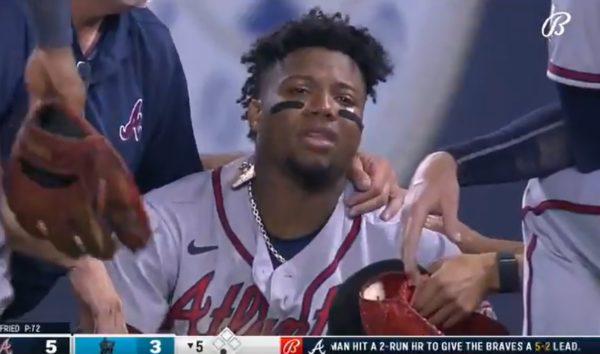 Jazz Chisholm Jr. belted an inside-the-park home run on Saturday that was made possible by a serious injury, and the Miami Marlins sent an extremely regrettable tweet about the play.

Chisholm belted a line drive to right field in the bottom of the fifth inning, and Atlanta Braves outfielder Ronald Acuna Jr. nearly made an outstanding catch. Acuna leaped to try to snag the line drive, but the ball went over his head. He landed awkwardly when he came down and stayed down on the ground. That allowed Chisholm to round all the bases. Here’s the video of the play:

Ronald Acuña Jr. is still down in right field. pic.twitter.com/9XqYGoAXnT

The person running the Marlins Twitter account did not appear to have any sympathy for Acuna. The team sent a tweet that showed Acuna laying on the ground with the caption, “Want to see Jazz hit an inside-the-park home run?” The tweet was deleted, but you can see a screenshot below:

Want to see a trash organization stoop even lower than anybody thought they could? Doesn’t matter that it has since been deleted, this is a straight-up bush league BS tweet by the Marlins pic.twitter.com/xknssiKWfI

You can imagine how people responded. The Marlins were torn apart on Twitter, and the tweet looked even more tasteless after the Braves announced that Acuna tore his right ACL and will undergo season-ending surgery.

There is a history with Acuna and the Marlins, as the Braves star has called out Miami on social media for plunking him so many times. Still, bad blood doesn’t excuse the tweet the Marlins sent. Celebrating an injury is always a terrible look, and that’s pretty much what they did.