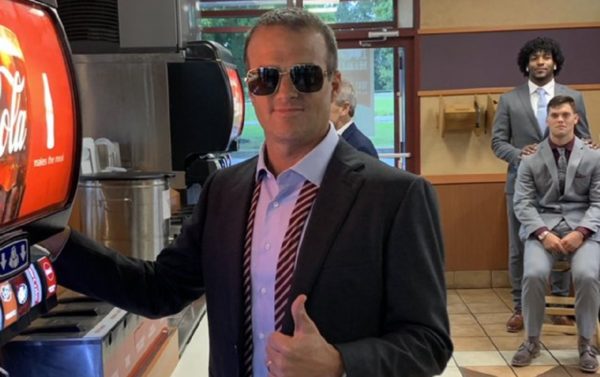 The SEC is conducting its media days in Hoover, Ala. this week. On Monday, Beamer was one of three coaches to speak. The first-year head coach made a headline due to his attitude towards rival Clemson.

After he was done talking, Beamer recreated a legendary Steve Spurrier photo.

Here’s a look at Beamer:

Those with great memories will recognize the photo immediately. After completing his duties at the SEC Media Days in 2013, Spurrier headed to Arby’s, undid his tie, and gave the camera a thumbs up for a classic photo.

That photo became legendary and a perfect representation of the Ol’ Ball Coach.

Spurrier is the best coach in South Carolina history. He had a three-year tenure from 2011-2013 where his teams went 11-2 each season, won their bowl games, and finished in the top 10. His teams produced numerous NFL stars and made South Carolina a power for a brief period, which was previously unheard of for a traditionally middling program.

If Beamer has any bit of the swag and success of Spurrier, he’ll be in good shape.