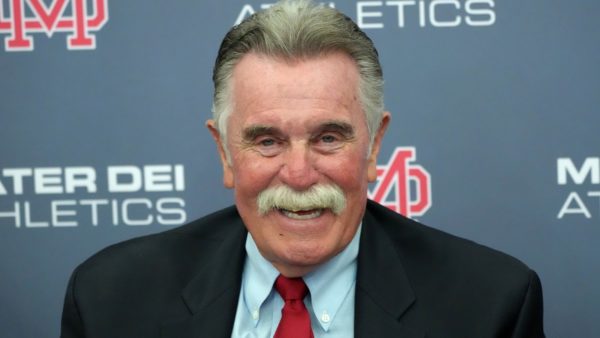 Rollinson, who is in his 34th season as head coach at Mater Dei in Santa Ana, Calif., announced that this season will be his last.

Rollinson’s announcement was shared via a statement through the school.

“I have recently decided that this year will be my last year as the head coach of Mater Dei football,” Rollinson’s statement said. “After playing at Mater Dei more than 50 years ago, 47 years coaching at Mater Dei and 34 years as the head coach, making this decision at this time with the entire starting line-up returning next year, should make it easier for the next coach and Mater Dei to continue with our winning tradition.”

The Monarchs are 10-0 this season and riding a 27-game winning streak.

The Mater Dei program is among the most well known high school football programs in the country. They are regularly ranked among the best in the country, and are currently ranked No. 1 by MaxPreps.

Just last month, Rollinson told the Orange County Register that he planned to return next season. The 73-year-old’s program came under fire last year after a former player alleged he incurred serious injuries as a result of a hazing incident.