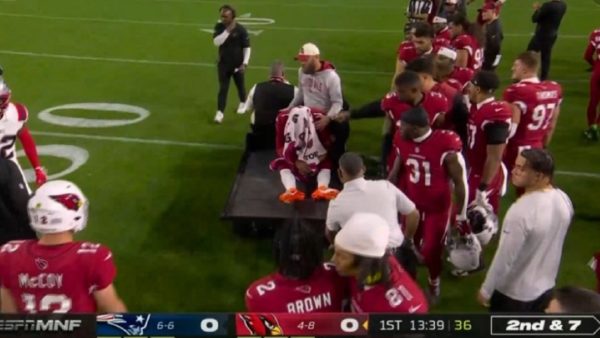 Kyler Murray is believed to have suffered a serious injury on Monday night.

Murray suffered a non-contact knee injury on the third play of his Arizona Cardinals’ Week 14 loss to the New England Patriots on “Monday Night Football.” He was carted off the field and had a towel over his head after suffering the injury.

The Cardinals initially termed Murray questionable and later out for the game. A subsequent report said the Cardinals feared the worst on the injury.

A further report from ESPN writer Joshn Weinfuss said that there was little doubt Murray suffered a torn ACL.

Murray suffering a torn ACL in December not only is bad news for the rest of this season, but also for next season. Unless his recovery goes extremely well, a torn ACL would likely mean Murray won’t be ready for Week 1 of the 2023 season.

The knee injury just turned the 4-9 Cardinals’ season from disappointing to disaster.