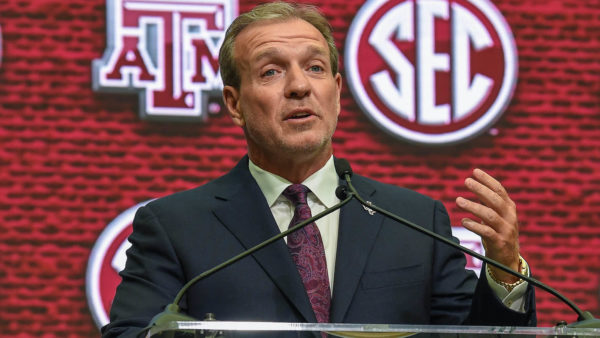 Fans couldn’t believe the comments Jimbo Fisher made on Thursday.

Fisher was talking about Texas A&M’s recruitment following Signing Day. He was asked by a reporter whether he ever envisioned college football having a transfer portal and the ability for players to make money through name, image and likeness rules.

“I knew eventually pay-for-play, I didn’t know NIL like it eventually came about,” Fisher began. “Like I say, the problem with all of it is there’s no consistency and rules. And then when you get into the portal, there’s so much tampering going on, it’s utterly ridiculous. It’s a joke. It’s an absolute joke and it’s ruining college football.”

Fisher doesn’t disagree with players making money or being able to transfer. He has an issue with the lack of regulation.

Fisher also put himself in the category of someone doing things cleanly.

“The ones that keep pushing the rules and breaking ’em will get rewarded. The other ones, you gotta fight, scratch and claw to do things the right way. But you can do it that way and win. Always have,” said Fisher.

The comments are tough to believe considering who’s saying them. Fisher landed the No. 1-ranked recruiting class last year, and many people believed that was due to A&M handing favorable NIL deals to players. That’s certainly what one rival coach thinks.

The Aggies don’t have a massive haul for recruiting in their 2023 class, but they still have a top-15 class. Fisher will need those strong results to improve on the team’s 5-7 season.

Jimbo Fisher got a little heated when asked about the transfer portal & NIL issues in college football:

"It's utterly ridiculous. I mean, it's a joke. It's an absolute joke that's ruining college football." pic.twitter.com/feuHxgcDYU