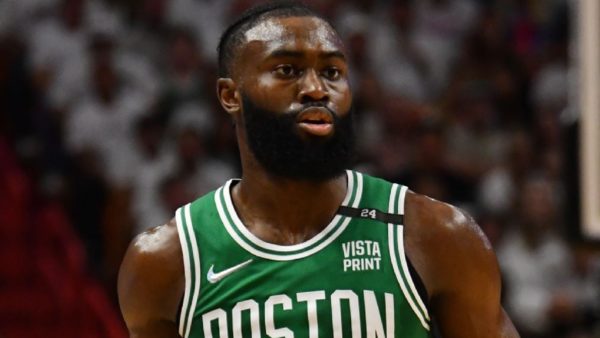 May 19, 2022; Miami, Florida, USA; Boston Celtics guard Jaylen Brown (7) brings the ball up court during the first half of game two of the 2022 eastern conference finals against the Miami Heat at FTX Arena. Mandatory Credit: Jim Rassol-USA TODAY Sports

Jaylen Brown has been a lifelong Boston Celtic, but one opposing team is hoping to change that.

Heavy’s Sean Deveney spoke this week to an Eastern Conference executive who believes that the Atlanta Hawks will be a major threat to sign Brown away from the Celtics down the road.

“They’ve been after more two-way players in recent years, because signing up a few big names around Trae Young has not worked out,” the executive was quoted as saying of the Hawks. “We’ll have to see what they do with [forwards De’Andre] Hunter and [Onyeka] Okongwu because they’ll need extensions. But if they can clear out the room, that’s probably the biggest team to worry the Celtics.”

Brown, 25, has two years left on his contract with Boston before he becomes an unrestricted free agent in 2024. He is a native of Atlanta and attended Wheeler High School in nearby Marietta, Ga. Brown has also had a big impact on the local Atlanta community over the last few years.

Despite the Celtics’ NBA Finals appearance last season, there is growing uncertainty over Brown’s long-term future with the team. He was reportedly included in Boston’s trade offers for Kevin Durant and has shown discontent with Celtics fans during recent months. A homecoming opportunity with a rising Hawks team would probably have some serious intrigue for Brown.